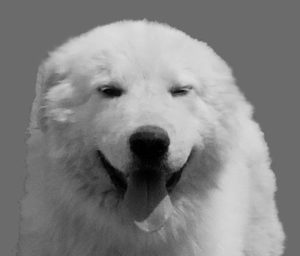 On the whole the head is large and flat, of conical shape, reminiscing of that of a polar bear.

Finally, in this new Standard, the placement of the head of our dog in dolichocephaly no longer appears and we all breathed a sigh of relief, remembering the rivers of ink spent to express the many moods about this. Honestly, it was really embarrassing for a cynologist to justify dolichocephaly in the Maremma and Abruzzes Sheepdog. In fact, it seemed more like a contradiction since the prof. Solaro, who was the precursor of the meso brachy and dolichocephaly, asserted that the characteristic of the dolichocephalic dog is the same length of the muzzle and the skull, an equivalence that in our breed, on the contrary does not exist.

The large head should obviously be understood as voluminous in all dimensions: length, height and width. The clarification is not superfluous as it might seem, because, unlike previous versions, in this new Standard there is no indication of how wide the head should be, but we will deepen this aspect when we will talk about the skull.

The substantial volume of the head should not be exaggerated however, because it would lose the harmonic proportion that the head must have with the remaining body mass.

The head (attention: not the skull) of the Maremma and Abruzzes Sheepdog is defined flat because when we look the head from the side the muzzle connects to the skull without abrupt interruptions. The interruptions are generally caused by a very marked stop or, more essentially, by the excessive development of the superciliary arches which, as we shall see later, must only be detectable without ever interfering with the clean profile of the frontal portion of the skull vault. Care must be taken not to consider the flatness of the head in an absolute way because this would imply the absolute depreciable depression of the frontal bone and the superciliary arches.

The conical shape of the head, detectable by looking at the head from the front, is given by the convergent progression of the lateral axes of the skull and the foreface towards the nose. Of course, it is a truncated cone and not a pointed one, not to lose the indispensable squaring of the front face of the muzzle that gives so much power to the whole head.

Association of the head of the Maremma and Abruzzes Sheepdog with the white bear’s head appears in all the breed’s standards since the first draft of 1924. In reality, it is not necessary to be rigorous in believing that all the characteristics of the polar carnivore’s head are reported on the head of our dog. The bear has a narrower foreface in relation to the skull, smaller eyes, etc., indeed the Standard never spoke about similarity. Overall, it must remind or recall the visual memory, just suggesting that of a polar bear, nothing more.

Someone has pointed out that the Standard, since 1924, has never dedicated even a minimal description to the typical breed expression (called in jargon: smiling expression) which is also an important aspect in the overall value of our dog. We all agree that no judge can fully evaluate a Maremma and Abruzzes Sheepdog until he has not understood and metabolized the right expression of the breed, but it is also true that expression is one of the most difficult concepts to be described by words. It is not a fixed data like colour or height, but it is the overall product given by the shape and balance of the skull and the muzzle, by the placement, the shape and the colour of the eyes, by the set and the length of the ears, but also by the length of the buccal rim, by the right chisel, etc. In short, it is used to say that the expression of the Maremma and Abruzzes Sheepdog is smiling also because of the slight curving at the lip angle, but this is a reductive indication because we are talking about something that can only be explained by illustration, repeated visual comparison and, perhaps principally, by breeding the breed.